OK, Friends.....  I had an accident, and laid down my Electra Glide, and was in a coma for a few weeks....... I am back to work now, healthy and alive! I will ask everyone reading to please pay attention to everyone in front of you....every day.....apparently, the waste of human existence that was in front of my Harley completely disregarded me...and cut me off, which caused me to lock up the brakes on my bike and lay it down.  (Hell, even with me bleeding and out cold on the… 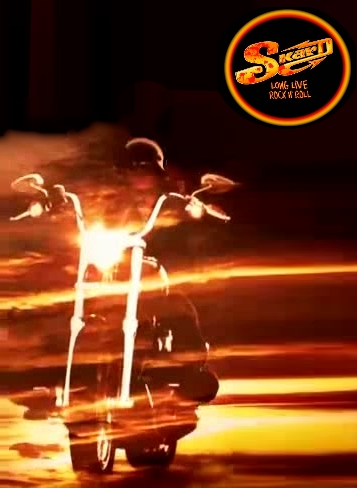 Fellow riders......We are the SKARD rock band~true biker rock music~Skard original tunes are all about riding, freedom, and brotherhood and sisterhood ..Give us a listen Thanks !!!

SKARD music video IN MY DREAMS

There is one predominant reason I see a lot of couples get together, and a lot of couples split up.  At it’s simplest, I would say that reason is passion.  Yep, you read right.  People split up because of passion.  Think about it, passion is a two-edged sword, isn’t it?  People love with passion.  They have, let’s say, intimate marital (or extra-marital) relations…

Makin' it better for the next guy??

A friend recently mentioned that the people, (more specifically the taxpayer), of today needs to step up and fight taxes they think are unfair, and support those that will help “the next guy”, or future generations, I.E. : Infrastructure, better roads, bridges, utilities, parks, schools….

That all sounds well and good, on the surface, doesn’t it?  Sure it does.  Till you figure out what they are REALLY looking for…. And it…

Before you say it...yes, it's true and legal... Time for a sermon from the Right Reverend Dr. S.A.Schnarr.....

Trayvon Martin's parents will need the emotional support and strength to make it through what must be a very traumatic feeling for them. We can all relate to the loss of a loved one, and the feeling that someone should be held accountable. ...someone should pay. What saddens me is that people see it all as black and white, both literally and…

Greetings Brothers and Sisters of the road.....

Recent tragedies in the news set me to thinking....and that's always a dangerous thing, innit? I started a discussion on facebook about it....got some interesting answers, and it provoked a lot more thought. This oughta set yer mind ta spinnin', whether yer a Christian or not.....  Dig it...points to ponder from yer ol' buddy Scotty.....

So.... The tornado is on the way, coming right at you and a classroom full…

Cold day but much progress

I want to thank everyone for being at our ride saturday May 11th it started out cold but with coffee and donuts it helped to warm us up. We had a short service then performed bike blessings on bikes and riders. Out of 39 bikes we had 3 people request an eternal blessing (ask god into there life) so that just tells you god works in all conditions and weather. We will be having a come as you are service Monday night 5-13-13 at 6:00 oclock at dayton united metodist church.

I have seen several posts and news stories about bullies recently. Rather than repost all that stuff, I wanna tell you a real life "Bully" story.... Mine. Sometimes we all need a different perspective.
Bullying is one of the most difficult experiences of any kid's life. My experience, though, and my perspective, were, and still are,…

Okay I need some help.  We have started a Christian MC here in Lafayette.  I need to contact the following clubs concerning protocol regarding our patch; Invaders, Sons of Silence, and Boozefighters.  Can anyone get me in contact with members of any of these clubs?  I want to follow protocol out of respect.

One more gun in Aurora??

For those of you who don't regularly read the local newspaper (The Lafayette Journal and Courier), a fella who has a regular column there, as well as a couple of blogs, Mike VanOuse, wrote an article that caused a bit of a stir the other day...... He was saying if anyone in the theater in Aurora Colorado would have been armed besides the idiot assailant, much of the carnage could have been avoided.  People came out of the woodwork to bash him personally and professionally because he DARED to…

Don't any of you remember Junior High School literature? Geez, we were taught these lessons as kids.....

To paraphrase the lesson: We all want to believe, and as such we assign undue credit to that person, or entity, in which we "believe". A lot of you exhibit this behavior with regard to your Political favorites, or maybe your Religious icon (Obama, Romney, God, Buhdda, the great Spirit, what…

When Words of Wisdom Really Count

when words of wisdom really count

The way in which one views a situation can change the setting of the situation. Recently I mentioned i was at a particular location. I had a friend jump out and condemn the location based on his experience at this location. I will not say if his perspective was accurate or not, but his viewpoint was over the top and off topic. The place I was visiting was helping support autism and help raise awareness for this condition. The location was doing a great service to this cause, and I was…

OK, Friends.....  I had an accident, and laid down my Electra Glide, and was in a coma for a few weeks....... I am back to work now, healthy and alive! I will ask everyone reading to please pay attention to everyone in front of you....every day.....apparently, the waste of human existence that was in front of my Harley completely disregarded me...and cut me off, which caused me to lock up the brakes on my bike and lay it down.  (Hell, even with me bleeding and out cold on the…

2012 Homegrownbiker.com © All Rights Reserved and will be strictly enforced.